Today I want to introduce you to a few of the animals that stay with us for a long time, for a season, or just pass through.

Meet my female cat, whom my boys named Pablo. She came to us last fall and just stayed. We built her a little ledge on the outside of our kitchen window where she likes to sleep curled up in a donut. Since she is an outside cat, we have built her an insulated box where she sleeps when the weather gets cold. She used to hunt mice on a regular basis bringing us at least one every morning. Now she is lazy and only catches them whenever she feels like. Which is random 🙂 I can only take pictures of her when she isn’t looking; otherwise she is at my feet wanting to be petted 🙂

Mr. Chimpmunk appeared about a month ago. He would perch on a patio’s ledge and stare at Pablo. Pablo would be asleep or lazy enough to notice his existence without moving a whisker. Then one day he disappeared. Either he found himself a different home or Pablo decided to spring into action and thus ended his existence. She is not saying anything on this subject, so I guess I will never know 🙂

Robin came in the spring, found himself a wife, together they made the nest, raised little robins, and moved on. I have seen them at the bird feeder. I wonder if the same pair of robins will come back next spring?

The garter snake and his mate live at the edge of my land under the pile of old cut grass. My husband sees them frequently when he makes a fire nearby. They poke their little heads out of the pile when someone approches. They are so cute 🙂

What little animals do you see where you are? 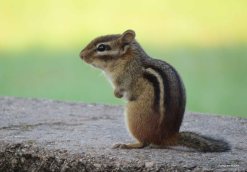 5 thoughts on “My Critters”