It is all well and good to consider life in the castle from the perspective of a tourist standing outside its gates and admiring the grandeur of the building. But what was it REALLY like to live there? The best way would be to embark on a trip back in time; that being impossible, let me show you a couple of everyday items that may bring the life in Chateau de Chillon to reality.

No showers. I would have found that difficult to cope. What a person would had in his bedroom was this – I think – rather cute basin and a reservoir of water for basic needs. Although I do not remember seeing it, there must have been a room devoted to having baths, however infrequent. Toilets would have been round holes in the tower, which in the winter would have been freezing to the person’s behind 😉

To keep warm, a lidded pot filled with hot coals would have been placed under the covers before a dainty lady retired to bed. As I noticed not all of the rooms had coal stoves. Those chambers would have been unpleasantly cold in the winter. There was one stove that I found absolutely amazing, both in shape and decorations. It even had a little ledge to sit on, which I am sure was occupied most of the time 🙂

No closets, no hangers 😉 Garments were placed in wooden chests and as you can see some were not only utilitarian, but beautiful works of skilled craftsmen. To move them would require at least two strong men. I think they were put in one place and moved only when the lady traveled. Smaller chest with huge locks and re-enforced with metal were used to store or transport valuables or documents. Much like today’s safe boxes, although much more beautiful 🙂 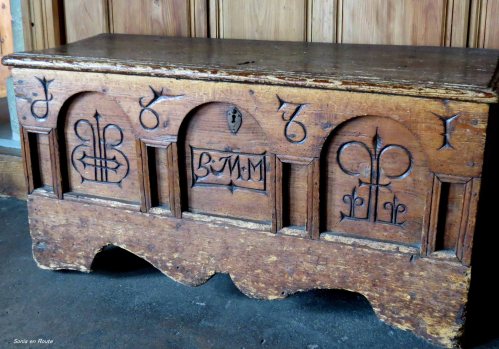 On the whole life in medieval castles was rather good. There is no point to compare them to modern conveniences; castles would loose in that contest. It is more instructive to compare them to other people’s living conditions, like peasants or merchants. Their houses, the means to keep them warm, and the amount of “stuff” they possesed were much poorer. To live in the castle would seem like a dream to many of them.