The amphitheater in Catania is located in the very center of the city, to the point that it is actually surrounded by busy streets and buildings. Built in the 2nd or 3rd century during the Roman Empire, the amphitheater offered sitting to fifteen thousand people.

Now only a small section of the amphitheater is visible, most of it sunk and covered by streets and buildings. The ruins remember Roman entertainment of various kinds including the purposeful flooding of the amphitheater to stage naval battles and later the infamous slaughter of Christians. There is even a plaque commemorating that event. Nowadays the amphitheater is the popular hang out for cats 🙂 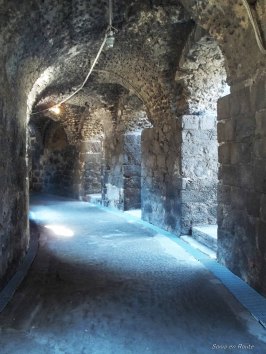